Last October we were very fortunate to welcome Medical Entomologist, Stephen Doggett, from Sydney University and Westmead Hospital, to speak with us about ticks and their habits and how to best combat them. We were especially fortunate as Stephen would otherwise have been participating in the SBS Insight Program ‘Tick Sick’ which aired on Tuesday, and which many of you may have seen. Stephen provided much valuable information about ticks, and this is just a summary of some of the key points that will be useful to parents.

Tick Life cycle, habits and problems they cause

Most of the ticks in our environment are paralysis ticks, Ixodes holocyclus

Ticks have four life stages and egg, larval, nymph, adult. These stages accord roughly with our seasons as shown in the diagram below: 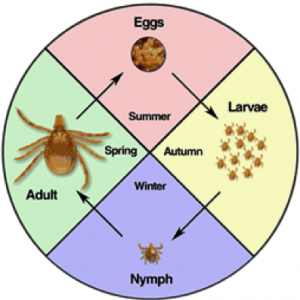 Larval or seed ticks (the tiny ones that often bite in numbers) have not yet bitten another host (animal or human) and will therefore be extremely unlikely to be carrying any pathogens. They are also too small to be a paralysis risk and are less likely to trigger a severe allergic reaction. They are however very itchy and unpleasant. Stephen suggests applying ‘Lyclear’ cream which will kill them, and then allowing them to fall off/out over time. If you are trying to identify them, Larval ticks are very tiny (smaller than a pin head) and they only have 6 legs.

Nymph and Adult ticks will have already had a blood meal and therefore may be carrying pathogens. Nymph ticks look like a tiny version of an adult tick.

How they move around

Ticks are hatched on the ground or in low vegetation and are less mobile in the larval stage when they will often be encountered in groups. This is why you may get a cluster of seed ticks which can number in tens or even hundreds. Ticks are generally not found much higher than 500mm above the ground. They have specially adapted front legs to sense you and to grab onto you as you brush past. They will then walk around on you until they find a spot to feed. She (only females bite us) will then insert her mouth parts. Ticks undisturbed may feed for several days. As they feed they become engorged. 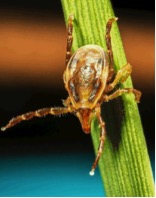 (only female ticks bite us)

Tick borne pathogens include bacteria such as ‘tick typhus’ or other substances such as the sugar which is the catalyst for the onset of mammalian meat allergy. Larger ticks are also much more likely to cause tick paralysis (more of a problem for very young children and animals) and to trigger direct allergic reactions.

Stephen advised that despite concern about and reporting of Lyme disease, the bacteria which causes it has not been identified in Australia in host populations (tick carrying animals like bandicoots, wallabies or dogs), in ticks themselves or in people. This is quite a contentious subject (as is clear from the Insight program) but Stephen was very clear and compelling about the matter from a scientific perspective. Those wishing to read a recent, comprehensive scientific paper on this issue should click on this link:

Mammalian meat allergy occurs when people bitten by a Paralysis Tick carrying the allergy catalyst, subsequently develop an anaphylactic reaction to consuming meats, dairy products and animal by-products such as gelatine. This syndrome has also been described overseas.

Stephen advised that the most effective repellents are those that contain DEET (diethyl-meta-toluamide). His view is that as long as repellents are used correctly they are a safer alternative than tick bites. He identified a hierarchy of effectiveness for repellents as follows:

He also advised that it is very important that users check that the product they select:

Mosi-guard which is used by the school is a PMD based product and comes about half way down this hierarchy of effectiveness. It has an APVMA number (54125/100/0105) and is stated to be effective against ticks for up to 4 hours.

I STILL HAVE NOT RECEIVED TICK REPELLENT CONSENT FORMS FROM ALL PARENTS FROM YEARS 3-6. I WOULD BE GRATEFUL IF YOU COULD RETURN THE FORM EVEN IF YOU DO NOT WISH TO USE A REPELLENT.

The latest advice on tick removal is that Lyclear should be used on larval ticks and larger ticks should be frozen using ‘wart off’ or a similar product. Once the tick has been killed with the wart off, ideally it should be left to fall naturally. Most people are very uncomfortable with this and if the tick is dead it may be removed safely with tweezers. NEVER SQUEEZE THE BODY OF A TICK!!

Removal with tweezers, while safe if done correctly, is much more difficult as it is very important not to grasp the body of the tick and thereby squeeze more toxins back into the host. Fine tipped tweezers must be used and the tick grasped very low, near its mouthparts. If the attachment site is swollen and the tick engorged this is very difficult to do. This is why wart off is now recommended.

The current position of NSW Health is:

The Australasian Society of Clinical Immunology and Allergy (ASCIA) has recently recommended killing an adult tick in place by using an ether-containing spray to kill the tick by freezing it. These products are normally used for the treatment of warts and skin tags and are readily available from chemists.

This document (NSW Health Tick Fact Sheet) does not recommend this method until evidence-based research becomes available. When new evidence is published this document will be reviewed.

The school does not remove ticks but does now have Lyclear, Wart-off and tweezers for parents to use as they wish. We still advise that if you are not confident in removing ticks or the tick is difficult to remove, or if your child has any known sensitivity to ticks or is showing signs of an allergic reaction – then the tick should be removed in a clinical environment.

We thank Stephen Doggett for bringing his comprehensive knowledge to the school community.

Next week we will focus on the strategies the school uses against ticks.